The Sky's the Limit

When I used to think of discipline, it brought up feelings of dread, of punishment. I think most will agree those are also their first thoughts. If we look a little deeper into the definitions in Webster’s we find:
Discipline: self-command, self-control, self-discipline, self-government, self-mastery, self-restraint, willpower.
Notice how many times ‘self’ is used? So discipline then is something that we can have control over, and when we have control over something, that is a very good thing, if we make the very best use of that control.

Discipline, I have come to believe is the master key to what we wish to gain, become and accomplish with our lives.
So what can we do, be, have? Are there limits?

It was a mostly clear day, just a few scattered clouds in the mid-west sky. Chris had never been to this community before. His job had brought him here, and he had to work on Saturday! As he peered out of his office window he noticed a railroad yard. Chris had always loved trains. Perhaps tomorrow before work, (yes, he had to work on Sunday too) he could drive down and check out the rail yards.
And that is where I met Chris.
It turned out this young man was the embodiment of self discipline.

Now here is a guy hundreds of miles from home, in a place he would never have been, had his work not taken him there, and he was working weekends. So how do I figure him to be one of the most disciplined people I may ever meet?
You see when Chris caught sight of our rail yard that Saturday afternoon he was mere feet from his co-workers, but four hundred feet above the city, traveling about 300 miles an hour in his F/A 18 Hornet. Just moments before they had been pulling a little over 7 G’s as they performed as a part of the Navy Flight Demonstration Squadron, The Blue Angels!
We spent almost an hour together, talking railroad and (whenever I could get him to stop talking about trains) flying.
What type of self-discipline do you suppose it takes to become one of the nation’s élite pilots?
Were there days when he wanted to quit, times that he was afraid, that it all seemed just too hard?
My guess is yes. But Chris persevered, he did not quit and his self-mastery has taken him to places he would never have gone to meet people (me) he would never have met. The discipline he has employed over the years now pays him dividends beyond what he could have imagined and memories to last, a lifetime. And most important of all is, who he has become, because of all he was willing to do.
So are the struggles worth the effort?
I only spent an hour with Chris, but I’m certain he would smile and say,
‘Yes sir. The sky’s the limit.’ 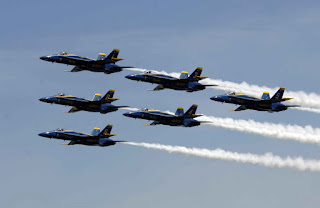 Be safe, Major Collins.
And thank you for your service.