Stumbling, staggering and with one mighty crash, she hit the dirt.
Whisky bottle still clutched in her hand, there she lay.
She was a short but large woman donning a misshapen felt hat, long yellow yarn wig stringing from beneath it.
We knew we were in trouble.
Only moments before all had seemed well. We had our rodeo ambulance prepared, last minute details were covered, and our guest helper for this evening’s performance had been instructed and given a western hat to wear. Where had he gone? Had he stolen our hat? The announcer was giving us our cue to enter the arena and begin the clown act. Hundreds of thoughts and scenarios rushed my brain when the horrible truth was recognized. We had, once again, been set up.
A rodeo clown’s job can be very lonely. Even while surrounded by hundreds of spectators and cowboys it is an extremely solitary feeling when you are one on one with a fighting bull. A much worse feeling is when your clown act is falling apart before your eyes, and it hasn’t even started. I always 'sweat' the clown acts more than the bull riding. You see the crowd expects the bull riding to be unpredictable. 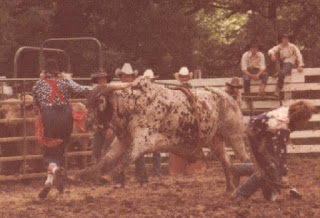 The acts are to be funny and entertaining. Hard to do when your plan is in shambles, and it was! The saboteurs? The stock contractor (our boss) and a handful of his agents. Hard to figure, isn’t it?
The usual plan was to have a guest assistant go into the arena, fall down and need medical attention. Our choice was always slight of stature for reasons that will become apparent. We would then come in to save the day in our rodeo ambulance.
This evening our victim, a 100 pound lad, had been kidnapped and replaced by the above mentioned, yarn haired, immovable 300 pound lass.
Red lights flashing, siren wailing we circled the arena and the rotund casualty.
The first couple of gags went OK.

As the fire crackers died down and the smoke cleared, Dave, the announcer questioned:
“Are you qualified to do this?”
“Of Course” was my reply. “I’m a member of the AMA, The American Malpractice Assoc.”

Dr. Marcus Welfare was my name. My able partner, Dr. Ben Krazy.
Shortly after our arrival I discovered that the driver’s door would not open. Screaming kicking and jerking I tore the door off its hinges and threw it away.
Dr. Ben then carried the ambulance door around with him as a preventative measure. If he got too hot he could roll down his window.
I had retrieved my Dr.’s Bag ( IE: golf) and was driving a few golf balls when we were reminded of the seriousness of the situation.
Rushing to her aid I attempted to straddle and administer artificial respiration.
Straddling was not working so I draped one leg over and did my best. 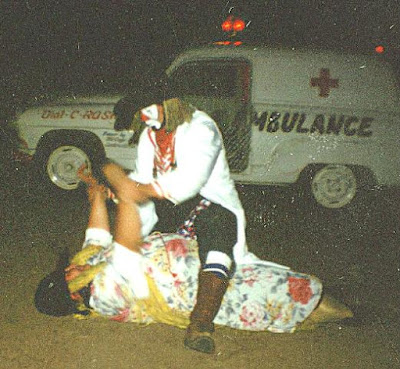 It became apparent, in our professional diagnosis that, she would need transported for additional care. This is when the real problems started.
In a sprint to the ambulance we retrieved our stretcher and placed it beside the patient.
The first and second attempt to pick up this creature proved futile. Our unrestrainable laughter was not an asset. After a quick physics calculation I determined that she should be rolled onto the gurney.
A slight mis-calculation rendered her face down and after rolling her back to the arena floor we adjusted the distance by half a roll and there she

was, face up! A triumph which we briefly

We then realized that she and the stretcher would need to be loaded into the back of our transport. Efforts to drag the two in that direction were met with dismal consequence.
Then we had an ah ha moment! We would drive the vehicle within hoisting range.
At full speed the ambulance approached and with a thunk thunk ran over the patient and stretcher. (Not to worry that was part of the original plan)

“Oh my God” Dave screamed!
I calmly surveyed the results and proclaimed; “She don’t look so good.” Looks like she was run over by a truck.”

The valiant struggle to load would now begin.

Grunts and groans were to little avail. After several ardent tries our best endeavors had achieved in barely placing one end of the bulging stretcher on the tailgate. Our energy levels nearing absolute zero, we be began to flog our yellow yarned victim with our hats until she finally crawled in, under her own power.
While catching our breath we scrambled back into the vehicle for our exit and…
“It won’t start!” I proclaimed.
“What do you mean it won’t start? We have an emergency here.” Dave scolded.
“It won’t turn over” was my reply.
And with that Dr. Ben proceeded to jack up the vehicle to perform repairs.
‘A loose nut’ was his analysis. Dave had some disparaging remark about more than one loose nut, or something to that effect
All the while I am explaining what a professional and a master of many arts Dr Ben claims to be.
When at that exact moment the car, patient inside, rolls over onto its side.
“Now look what he’s done.” Dave criticizes.
In my ever optimistic view I respond; 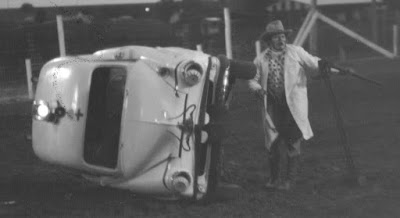 “Things are looking better! He’s got it turning over.”
And with the very last ounce of strength and determination we had, the ambulance and extra 200 pounds of cargo was rolled back to its wheels.


Physicians back in the cockpit.... one spark from the ignition, an explosion of a 3 inch bomb, fireworks rocketing out of the roof and overloaded tires rubbing the fenders…Dr's Welfare and Krazy and the best sport I have ever met exited the arena to the cheers of an entertained crowd, rodeo cowboys on their hands and knees in front of the bucking chutes and the smiles of a few satisfied saboteurs.

So are we able to glean a lesson from our ‘Medical Malady’?

· Things don’t always go as planned… go on anyway.
· Change from the routine can be good.
· And picking up some girls may be more difficult than you might think. 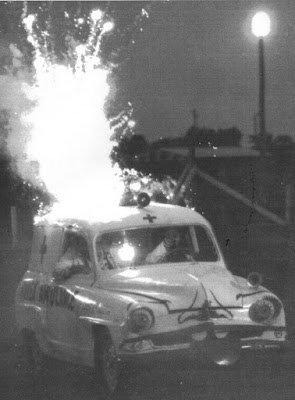